Fratricidal war in the interest of the Western powers

THE TRUTH ABOUT UKRAINE :
- Criminal fratricidal war caused by the fascist coup - 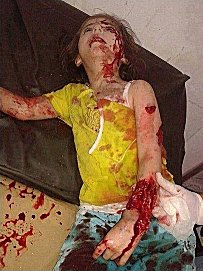 A brief outline of the historical background
Both nations, inhabiting a large area of ??today's Ukraine , belong to a large "family" of Slavic nations (this group includes nations: Polish, Czech + Slovak, Russian + Ukrainian + Belarusian, Bulgarian, Serbian + Croatian + Slovenian ... ) . True, there are certain differences in the linguistic and cultural as well as social traditions of the inhabitants of Ukrainian and Russian nationality. However, these differences, including differences in the economic level, have been successful since the 1920s. gradually leveling off and for decades (with the exception of the tragic years of World War II, when some forces in Ukraine shamefully sided with the German aggressors) Ukrainians and Russians lived harmoniously together *) in their common homeland and with their differences they complemented and enriched each other (we can leave out some excesses here, especially during the Stalinist dictatorship, often used as an excuse for contradictions) .
*) Historical contradictions, Ukrainian nationalism
However, the historical development of relations between Ukrainians and surrounding nations and states was very complex and contradictory . Tsarist Russia, Poland and Hungary (Hungary) did not recognize Ukrainians as an independent nation (only Slovaks and later Czechoslovakia were accommodating to Ukrainians - Subcarpathian Ukraine) . In response to the resulting national oppression, Ukrainian nationalism developed. It would be perfectly understandable and legitimate if it were a patriotic effort to create its own Ukrainian state (just as our non-violent National Revival eventually resulted in its emergence from German oppression and the creation of an independent Czechoslovakia) . Even fierce battles against those of oppression, power and repressive forces could be tolerated. Unfortunately, the situation developed differently. Hateful and despotic chauvinists , who promoted violence, terrorism and the murder of their neighbors (who would not usually reject the creation of a Ukrainian state) , mainly of Polish and Russian nationality, but also Ukrainians, who disagreed with this violence and refused to join , came under the leadership of Ukrainian nationalities .
During World War I, the "Union for the Liberation of Ukraine" was founded, later the "Organization of Ukrainian Nationalists". This organization, led by radical activists A. Melnyk and S. Bandera, committed terrorist attacks and murders in the USSR and Poland, after 1933 with the support of Hitler's fascism. This criminal activity culminated after the invasion of the USSR by Nazi Germany. Nationalist forces in Ukraine shamefully sided with the German aggressors and used the situation to burn villages and kill mainly Poles and other nationalities (they murdered more than 100,000 civilians, the brutality of the Banderas was also condemned by the Hitler SS!). The horrific crimes of the Banderas can only be compared to the Ustasha rampage in Yugoslavia (see " Yugoslavia "). A few months after the end of World War II, some of the terrorist actions continued by S. Bandera from his staff in the American occupation zone in Germany (democratic Americans somehow didn't mind ...; - they were already preparing for the Cold War) - hence the name " Banderovci "for Ukrainian nationalists and terrorists (although S.Bander was unfortunately not the only chief of nationalist assassins in Ukraine ..) .
After the end of World War II, all nationalism was eliminated in the Federal Republic of Ukraine , the opposite tendency was promoted - internationalism , tolerance and cooperation of all nations. Relations with neighboring states were also at a fairly good level and there was a real chance to gradually forgetto past wrongs and hostilities .
However, the situation began to change after the collapse of the Soviet Union. In 1991, an independent republic of Ukraine was proclaimed, with L. Kravchuk becoming its first president. The first impulses to instability were the very poor economic situation of Ukraine (similarly to other post-socialist countries, most of the industry was stolen and liquidated)   , but nationalist groups have already begun to form. In June 1994, L. Kuchma was elected president, and there was a partial stabilization. During the 2004 elections, there were sharp disputes and riots, in which the individual parties accused of manipulating the elections. These riots resulted in the so-called "Orange Revolution", during which V.Yushchenko and J.Tymoshenko came to power. At this time, they received more support from nationalist forces and increased corruption. In February 2010, however, V. Jankovièiè was elected president, J. Tymoshenko was in 2nd place in the number of votes (again, disputes arose over the election results) . There was a temporary, but rather unstable, democratic situation.

This absurd civil war cannot be "won" and, if either party temporarily succeeds, it will be " Pyrrhic Victory ". A divided and internally divided country with a hostile population and unfair relations with neighboring states will be a source of constant tension, unrest and trouble! Ukraine, in which the current Kiev regime would forcibly win, would become a parasitic and morally burdensome burden - it would still reach out for subsidies, plunder its mineral wealth with foreign capital, set up offensive military bases on its territory, and servilely support any evil. rich and powerful circles longing for world domination. Let's believe that doesn't happen, or at least not for long. Proud yet tolerant and there is undoubtedly enough cultured people in Ukraine, only they are not yet "heard" in the cries of political fraudsters and hateful riots .
In the current situation, the only sensible and viable solution seems likely fedarativní arrangement and complete disarmament and neutrality ..? .. The previous president V.Janukovièovi be reproached was reluctant to sign an association agreement with the European Union (following a review of some unfavorable conditions would likely finally signed) . The current Ukrainian government is eager to offer a swift signing of this agreement. However, in the current situation, it would be extremely honest and prudent of EU officials to refuse to sign this agreement now., or made it conditional on respect for fundamental democratic rights and, above all, an immediate cessation of violence and murder of its citizens in the eastern part by the Ukrainian government!
This did not happen; on 27 June 2014, for political reasons, the economic part of this association agreement was signed in Brussels. The EU is thus probably "cooked" for serious problems, perhaps in the near future ..? ..

An attempt at an objective view
I do not find it useful in this text to "parrot" the untruths and half-truths that are manipulated by manipulated propaganda on a daily basis. The purpose of our reflection is not controversy, but the pursuit of an independent view from a different angle . Some readers who have uncritically accepted what is officially presented to them may be annoying. Let them remain calm, I respect their opinion and I do not impose anything on them. However, I believe that many readers who are used to thinking on their own and have avoided "brainwashing" will think that everything is much more complicated and the truth can sometimes be completely different - ( maybe elsewhere than I think ..? ! ..) . I welcome your personal opinions and observations.
In any case, I consider war, as an extreme manifestation of violence, to be the greatest crime and scam. In this respect, I condemn both parties. I assure that I have no personal ties or interests to either side, my only motivation is to strive for a true objective view and a fair assessment . Lest we condemn the victims when they try to defend themselves and celebrate the invaders and assassins ..! ..
I am aware that in this reflection I venture into "thin ice": as a physicist contemplating in silence a laboratory over the mysteries and laws of nature and the Universe (and partly so detached from ordinary life) , I do not know politicsand I'm not even interested in her. So I'm not competent *). However, the reason for my position is not political, but moral .
*) On the other hand, a certain "training" in the methodology of scientific research, based on objective critical and skeptical reasoning (" Natural Laws, Models and Physical Theories "), taught me a certain judgment and "immunity" to quackery, propaganda manipulation and demagoguery of everything. kinds. I can "read between the lines" a bit and even if not professionally, I intuitively (from phraseology and the way of argumentation) I sense and know a lie or half-truth ...
Note: This is just a provisional version my discussion opinion on this sad matter, written in Ostrava, in July 2014 . It will gradually be amended and supplemented . And since, unfortunately, tragic events are still going on, we also occasionally update ...